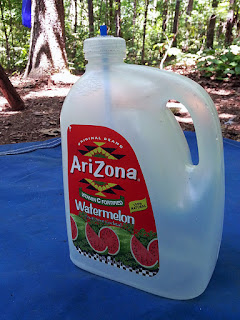 Nothing feels better after a day of hiking or being out in the woods than a nice warm shower. Here's a simple, no frills camp shower for short or long term camping you can make yourself that works flawlessly.

1 - 1 gal polyethylene drink jug with handle and cap. Empty and cleaned out.
Arizona Ice Tea jugs work great! Others if you want to make a smaller one.

1 - Slurpee Straw ( the larger kind with the little spoon/scoop on the end) Most convenience stores have them. 7-11, Speedway etc etc.

1 - Pen knife with narrow pointed blade. Sharp!
or if you want to get fancy

Step 1: Cut the straw.
Simple, you remove the scoop of the straw off, bite it off, cut it off. get rid of it.

Step 2: Cut the hole for the straw in the jug cap.
Again simple but take care to go slow as you want the straw to fit snug in the jug cap.
Using a pen knife start in the center and drill the hole out taking a little more each time testing the straw fit till you get a nice snug fit. Not too tight or forced but a good snug fit that holds the straw in place. If you went too far, get another cap that fits your jug and try again.

If using a hole punch, determine the size punch that will give the best snug fit. Make the hole dead center in the cap.

Step 3:  Make the shower holes.
I'm sure there's a better name for them, but this is the little holes for the water to come out. The shower part. Using the point of your pen knife make 4 tiny holes to the outermost part of the lid.
Keep in mind not too far to the edge as the lip of the jug will cover them.
You go till you just break through the cap and go to the inside of the cap to clean and complete the hole.
Make 4 tiny holes evenly around the cap - Tiny! You'll be surprised at how much water comes out a tiny, tiny hole.
Once you make the first 4 evenly around the cap it's easier to divide the cap up for more tiny holes.
So now make more... total of 8. Then 12... Then 16... Stop!

The more holes you make - and the bigger - the faster the water comes out. You don't want it to come out too fast. Make them tiny and you may want to start with 12 holes. You can add more if it's not enough. I found around 16 holes or so was perfect for me.

The below "shower head" was made with a pen knife and proved the perfect amount of holes and size holes.


Sep 4: Put it together
You got your jug cap drilled for the shower and straw. Now lets put it together.
Put the cap on the jug and slide the straw in till it's about a 1/4 inch off the bottom of the jug and still sticks out the top as you see in the images I uploaded of mine.

That's it... you're done!
Your the proud owner of a camp shower.

How to use it: or Taking a shower with your camp shower.
Starting out you may want to make two of these. The average person will use 2.5 gallons of water per shower depending on how many and how large the holes for the shower head were that you made.

I got it down to were I used 1 to 1.5 gallons per shower. Which included rinsing my wash cloth when done... mileage will vary so to speak.

Simply fill up the jug with clean water. Fill a pot from the jug with about 1/3 of the jug.
Bring to a simmering boil. Pour the heated water back into the jug. Put the cap with the straw (shower head) back on and give it a quick shake to mix the hot and cold water.

Test the water on the inside of your wrist.
If it's too hot... add some cold water. Too cold or not hot enough. Heat up the water from the jug again.

To use it, just hold it over your head with the top or shower head facing straight down of course. If the water doesn't come out right at first just give it a quick jiggle/shake while upside down over your head. Sometimes when it's too full this will happen, it air locks if too full. Once the air pocket gets a little bigger inside that it doesn't cover the bottom of the straw end it will free flow nicely.


I built a few of these over the course of 6 months while camping out in the hills of Tennessee and found that the clear jugs with the fancy handles though will work, they don't take to the boiling water too well and will somewhat melt and deform when you first pour in the boiling water. The handle though nice for pouring on these jugs, doesn't make for a good handle for the shower once upside down.

In an average week I used 10 to 12 gallons of water for shower, cooking and cleaning pots and pans while camping. (This did not include washing clothes.) To carry water to camp I made use of a throw away by most restaurants. A 5 gallon fryer oil jug as seen below.


Just ask your local restaurant if you can have one or two next time they change their fryer oil, most will be happy to give them to you as their just going to throw them away.

They don't last forever once removed from their cardboard holding box, but will last for quite some time before needing replacement. I got 6 months of continued use out of the one pictured above before a pinhole developed due to the plastic creasing.
Email Post
Labels: Camping DIY

The supplies and tools I need for various projects is constantly evolving and expanding.. To make things easier for those that feel inclined to contribute or donate supplies to help continue with projects, I created an Amazon Wish List. You can view it at the following link:
Chase's Amazon Wish List
The shipping address has been set up to automatically be given to the seller for shipment. And items removed from the list once purchased.
If you do contribute, please include you're email address so I may thank you personally.
Cheers...